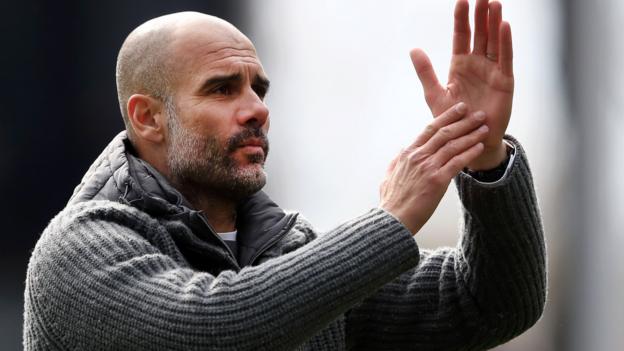 Manchester City manager Pep Guardiola believes his side have created a new standard in the Premier League – and has thanked title rivals Liverpool for their help in raising the bar.

City triumphed with a record 100-point haul last season and, with three games remaining, could amass 98 this term.

Jurgen Klopp’s Liverpool could end the campaign as runners-up with 97 points.

“The standards we created, people know that you have to be close to 100 – before it was 90,” said Guardiola.

“This standard was last season, we helped Liverpool to achieve it and Liverpool helped us to keep going, so thanks to Liverpool we are competing.

“Liverpool know that to win you have to make a lot of points. That’s what we communicate to anyone.”

The Spaniard’s side defeated Manchester United 2-0 at Old Trafford on Wednesday to move one point ahead of Liverpool, who play Huddersfield on Friday evening.

The record tally for a team who did not win the league is 89, achieved by Manchester United in 2011-12, but victories against Huddersfield, Newcastle and Wolves could see Jurgen Klopp’s side surpass that by eight points and still not topple City.

The Reds have lost just once in the league this season and Guardiola says the unprecedented achievements of his side demand clubs must reach a new level to compete for the title.

“I’d sign to maintain that level, I’d sign to do what we have done again in the Premier League. I don’t expect more,” said 48-year-old Guardiola.

“It was easier before, everyone can lose to anyone. Last season we won a lot of games, this time too. That’s the standard we’ve put it.

“When Usain Bolt makes a 100m race that’s the standard and the others have to achieve it. Like, Jack Nicklaus, Tiger Woods, that’s the same. 100 points in a season – if you want to compete you have to do that.”

City are on course to achieve an historic domestic treble should they defeat Watford in next month’s FA Cup final and become the first team to successfully defend the Premier League title since Manchester United in 2008-09.

But Guardiola, a domestic treble winner in Spain with Barcelona, says his club’s final trophy haul will have no influence on his reflection of his third season at Etihad Stadium.

“I’m concerned with Burnley, Leicester and Brighton,” he said. “We will analyse at the end of the season how many titles.

“It’s not going to change my opinion of what we’ve done this season, how many titles we win. All respect is for my players and of course what Liverpool have done.”

Leigh Griffiths: Celtic & Scotland striker to return to training after...