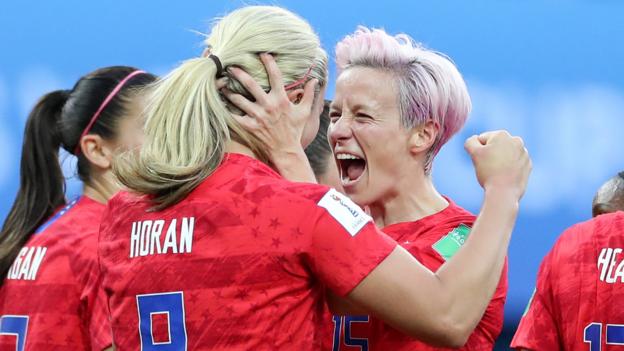 They were the last of the major contenders to play – but a ruthless, record-breaking Women’s World Cup demolition of Thailand showed why the United States are first in the world rankings.

The reigning champions’ relentless 13-0 win in Reims – the city in which France used to crown its monarchs before the rise of the republic – told the world how determined they are to stay on the throne.

In contrast Japan, who have exchanged wins with the USA in the past two finals, were held to a 0-0 draw on Monday by an Argentina side ranked 37th in the world, three places below Thailand.

And the flood of goals was at odds with other title-chasing nations, who struggled to finish off their opening opponents.

World number two side Germany had a narrow 1-0 win over China in Group B, while England had to settle for a 2-1 win over improving Scotland, a nation they beat 6-0 in 2017.

Similarly, European champions the Netherlands needed a late winner to beat New Zealand in Group E, and Canada edged past a Cameroon side ranked 41 places below them.

USA are ‘on a mission’ – Ellis

Yet no corks were being popped by USA boss Jill Ellis in France’s Champagne region – she stressed there would be ups and downs to come.

“This will be an incredibly hard World Cup. This was only game one,” she told BBC Sport.

“The players are on a mission. This is just one step in that. They understand that the mission matters most.

“I’m not saying a big result like this is the be-all and end-all but it lights a little bit of a fire in terms of their confidence for sure.

“Feeling invincible, that’s the feeling you want. It’s how you want to start a tournament, with players feeling good about their game. It’s about building momentum.”

Can anyone stop the Stars and Stripes?

Of the other favourites, hosts France did impress in a 4-0 win over South Korea in Friday’s opening game in Paris.

The French – who are yet to win a major tournament – and the USA could meet as early as the quarter-finals if both win their groups.

To top Group F the USA will need to overcome a highly rated Sweden side, who they face in their final group game in Le Havre on 20 June.

The Swedes – ninth in the world rankings – eventually overcame a resilient Chile – who are ranked five places lower than Thailand – earlier on Tuesday, giving Ellis’ side a vastly superior goal difference before their own meeting with La Roja on 16 June.

The USA are bidding to reach their third consecutive final and become only the second nation to successfully defend the Women’s World Cup, after Germany’s 2003 and 2007 successes.

A new record – the USA’s win in numbers

‘To respect opponents is to play hard against them’

As the USA joyfully celebrated each of their 13 goals – including six in the final 16 minutes – was it sporting of them to react to each one with such vigour?

“Every time we score a goal in the World Cup, well, I’ve dreamt of it since I was a little girl,” said Morgan, who consoled distraught members of Thailand’s squad after full-time.

“We want that gold star. Tonight, we knew that every goal could matter in this group-stage game.

“When it comes to celebrations, this was a really good team performance and it was important for us to celebrate with each other.”

“I don’t find it my job to go and harness players and rein them in. This is what they’ve dreamt about.”

However, after such a free-scoring victory, is there any danger of complacency from the USA, with far tougher challenges lying ahead?

“That’s easy. We’ve got enough experience to know this is a twist and turn, up and down rollercoaster ride,” Ellis insisted.

“We believe we have got more to do. We’re going to stay humble and go back to work.”

BBC Sport has launched #ChangeTheGame this summer to showcase female athletes in a way they never have been before. Through more live women’s sport available to watch across the BBC this summer, complemented by our journalism, we are aiming to turn up the volume on women’s sport and alter perceptions. Find out more here.

Hamilton wants to prove himself against new F1 generation