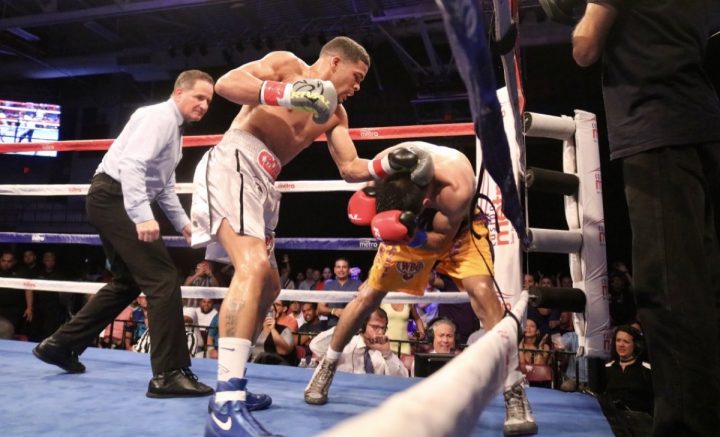 With a ruthless attack to the head and body of Nicaraguan Julio Laguna, Puerto Rican Jean Carlos “Lobo” Torres scored a TKO victory in the third round in the main bout of “A Puño Limpio”, which took out before full house at the Ruben Zayas Montañez Coliseum in Trujillo Alto in a presentation of PR Best Boxing Promotions (PRBBP) in association with Spartan Boxing.

Torres (16-0, 12 kos) defended his WBO Latino title at 140 pounds for the second time and scored his fifth straight knockout in his town of Trujillo Alto.

“I promised this victory to my Barrio La Gloria and I complied, the rival came well prepared and to fight, but as soon as I put good hands on the body I realized it was a matter of time to defeat him,” said Torres after his victory.

The fight began with Torres putting his hands to the face and body of Laguna (15-2, 10 kos), who responded successfully putting good punches to the Puerto Rican. In the second round both fighters were connected at times, but in the middle of third Torres shook Laguna with good combinations putting him in bad conditions and causing referee Luis Pabón to stop the action at 1:45 of the round.

Are you faster than a pro boxer? Boxing fans take on the 12-second challenge

Julio Cesar Chavez Jr: “I Can Beat All The 168lbs Champs”

Hughie Fury vs. Samuel Peter added to Khan-Goyat on July 12

Mikey Garcia and Danny Garcia have agreed to terms for fight...